Though Madame X is today regarded as one of the great American paintings, Sargent’s masterwork shattered the reputation of its subject, Amelie Gautreau. The original article I wrote can be found here. 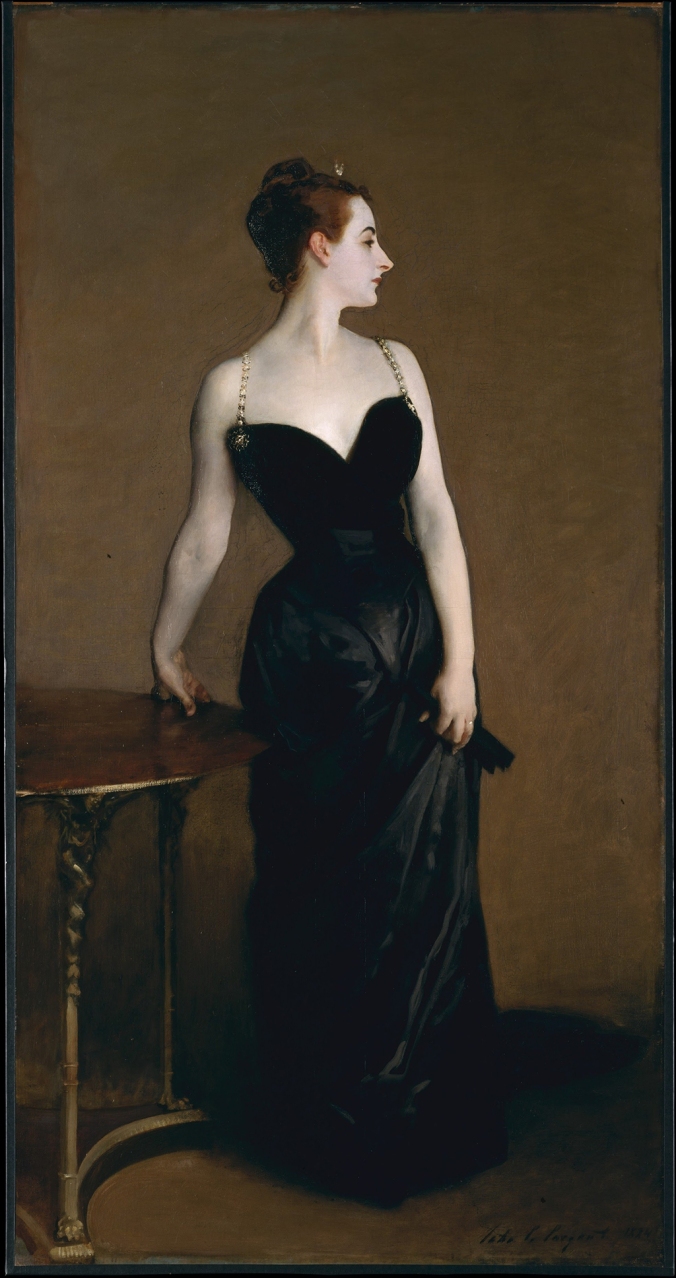 The woman known as Madame X was born Virginie Amélie Avegno in New Orleans in January 1859. Her parents were wealthy plantation owners, but after a series of tragedies — her father’s fall in the Battle of Shiloh, the death of her sister Valentine from fever — the eight-year-old Amélie moved to Paris with her mother.

The Avegno matriarch immediately began grooming her daughter for a good marriage. The goal was realized when Amélie was nineteen; the suitor was forty-year-old Pierre-Louis Gautreau, a banker and shipping magnate. As unglamorous as the match appeared, Amélie understood that once she was a married woman, there would no longer be the need to play the virginal maiden. As soon as the ink dried on the marriage certificate, Amélie set about plotting to conquer Paris.

With money no object, Amélie was free to commission dresses from top designers; to attract maximum attention, she favored chic, simple gowns that accentuated her figure, rather than the fussy frocks popular at the time. She painted her lips scarlet, drew in her eyebrows in mahogany, and reddened the tips of her ears; it was speculated that she ate small amounts of arsenic to maintain her otherworldly pallor.

Her efforts were massively successful; from the moment she made her society debut in 1877, Parisian tongues were wagging about the singular American beauty. Slender and supernaturally pale, with waves of copper-colored hair swept back from her dramatic, sculptured features, Amélie Gautreau was clearly something new, a striking vision of the modern Parisian woman. Her ascent was rapid, the adoration of her public nearly absolute; but it was her association with respected painter John Singer Sargent that would precipitate her downfall.

The Artist and the Painting

Sargent had already won several prizes at the Paris Salons before he met his most famous subject in 1881. Two years later, after much pleading, Amélie agreed to pose for him, and Sargent rented a studio near the Gautreau home. A black dress was decided upon almost immediately, but Sargent went through many pencil and watercolor sketches trying to settle on the best pose. Because Amélie was flighty and hated to sit still, Sargent eventually ended up staying with the Gautreaus at their summer home in Brittany, so his subject would always be close at hand. Finally, after a long period of artist’s block, Sargent set to work.

Though the process of painting what would eventually become Madame X was trying for both artist and sitter — the pose Amélie had to hold was uncomfortable, and Sargent had a hard time matching her lavender skin tone, among many other problems — by March of 1884 it was ready to be sent to the annual Salon. Amélie herself, though she had not yet seen the finished product, thought the work to be a masterpiece, and apparently all of Paris was abuzz with news of the portrait before the public had actually seen it.

The Public Reaction and the Downfall

When the moment of truth came, however, both Amélie and Sargent were unprepared for the venom of the attacks. The portrait, critics cried, was ugly, obscene, scandalous; the fallen strap of the dress and its body-hugging quality screamed vulgarity, while Amélie’s famously pale flesh looked corpse-like. Overnight, Amélie went from the darling of Paris society to a laughingstock, and cruel caricatures of her appeared in newspapers and magazines. Sargent, for his part, received a severe blow to his reputation as well; besides that, after the fiasco surrounding the painting, the Gautreaus refused to buy it.

Later on, Sargent repainted the offending shoulder strap in its proper place. Despite all the setbacks, his career eventually recovered and flourished, and for the rest of his life he claimed Madame X was the best work he had ever done. He sold it to the Metropolitan Museum of Art in 1916.

Amélie Gautreau continued to appear in society for three years after the scandal, but the press were far less effusive in their praise. As her thirtieth birthday approached, Amélie made a play for renewed attention by getting her portrait painted by other artists, but critics were quick to point out that Amélie was past her prime. After many slights about her faded glory, she became a recluse, rarely leaving her house, even as the once-disparaged Madame X was slowly building a following. She died in July of 1915, perhaps in the end a victim of her own vanity.