Fans of the show may remember that way back on Episode 8, we talked about the serial killer / rapist known as the Original Night Stalker (aka the Golden State Killer). Well, lo and behold, just as we were preparing a topic for this week’s show, THE ORIGINAL NIGHT STALKER GOT CAUGHT!!! Yes, the scumbag’s name is Joseph DeAngelo and he is currently in custody, so far charged with eight counts of murder in the horrific crime spree that terrorized California from 1976 through 1986. To celebrate the capture of this long-sought-after criminal, 13 O’Clock is doing an update and revisit of the case, since our first episode about the rapist and murderer caused so much interest. Listen in as we break down what we know about the man behind the monster, and discuss what we got right (and wrong) on our earlier show! It’s a super-topical, special EAR-ONS edition of 13 O’Clock, and it’s episode 89.

Clip at the beginning from ABC News.

Song at the end: “To Catch a Killer” by Grimmstine. 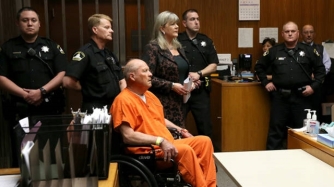