On this chilling installment of 13 O’Clock, Tom and Jenny are discussing the singular case of the man who — if all his confessions are legit — may be the most prolific serial killer in the United States. Samuel Little, a drifter originally from Georgia, was convicted of a total of eight murders in 2013, but is suspected by the FBI of being responsible for as many as 93 slayings of women in 19 different states since the early 1970s. Despite this, he still remains somewhat under the radar as far as well-known serial killers go, perhaps because he didn’t make his infamous confessions until 2018. So sit back and listen as the horrifying tale unfurls on a grim episode 191.

The Faceless Villain: Volume Three is now available for purchase in print and ebook formats! And now the audio book is available too! Get it here!

Click here to sign up for Audible! If you buy my book first, I get a bounty!

Some of you may remember my short story collection The Associated Villainies, which I published way back in 2011. Well, I have recently published a second edition, complete with four extra stories, a new cover design, tweaks and corrections to the stories, and a cooler interior layout. Here are the print and ebook versions, and the audio book version is now available here!

Go subscribe to us over on our BitChute channel.

On another of our true crime installments of 13 O’Clock, Tom and Jenny are examining the twisted psyche of serial killer, rapist, and bank robber Israel Keyes, a chillingly detached murderer who lived a double life and killed at least three people, and probably more than eight. His meticulous planning of his crimes, and the fact that he would often fly across the country in order to target individuals at random, meant that it took a long time to catch him, and once he was captured, he committed suicide, taking his secrets to the grave. Tune in to this oft-requested topic, a cross-country spree of serial murder on episode 99.

Clip at the beginning taken from ABC News.

Song at the end: “Killing Strangers” by Marilyn Manson. 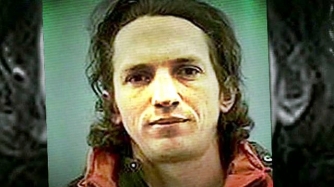