Fears of premature burial prompted the construction of these strange institutions in the 19th Century. The original article I wrote can be found here. 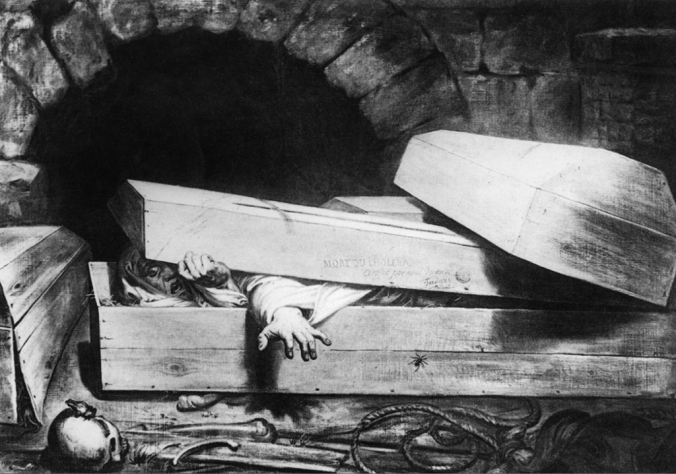 The idea of being interred alive is one of humans’ most primal and unspeakable fears, though its common recurrence in legend and literature betrays a helpless fascination as well. There is probably no way to ever discern how many unfortunate people throughout history have fallen victim to this gruesome fate; it’s likely that the numbers swelled during plagues and other epidemics of disease, as bodies were hurriedly placed into mass graves to forestall contagion. Whatever the actual numbers, it is certain that the problem was clearly widespread enough to cause some societies to take unusual precautions.

Bruhier and the Uncertainty of Death

Debates about the exact moment when a person made the transition between life and death had been raging at least since the days of Pliny, with many criteria being used to determine the difference between a dead body and a living one. But the possibility that fallible medical professionals or family members might mistakenly bury someone who was still alive didn’t fully capture the public’s imagination until the 1745 publication of a book called Dissertation sur l’incertitude des signes de la mort by Jean-Jacques Bruhier.

The book was a translation and expansion upon the work of a Dutch anatomist named Jacob Winsløw, who recommended a series of tests on supposed corpses — blowing pepper into the nostrils, shoving red-hot pokers up the anus, slicing the soles of the feet with a razor — to ensure death before burial. Bruhier’s book repeated these ideas, but also added scores of grim, sordid accounts of premature burials — some well-documented, some repetitions of long-lived folk tales. Additionally, Bruhier took Winsløw’s calls for burial reform even further, arguing that putrefaction was the only sure sign of death, and advocating for a system of “waiting morgues” where bodies could be kept above ground until they began to rot.

The Germans Build the Morgues

Though Bruhier’s ideas were never implemented in France for one reason or another, the massive success of the book ensured a series of translations, including a German one in 1754. This book, along with a similarly themed tome by another Frenchman, François Thiérry, was taken very seriously, discussed at length among German doctors and intellectuals. Beginning in the early 1790s in Weimar, at the behest of influential physician Christoph Wilhelm Hufeland, plans began to percolate to construct a Totenhaus, or house for the dead, in every German town.

These first waiting mortuaries were large, stately affairs. Corpses (or supposed corpses) were laid out in their shrouds, watched over by attendants who stared through windows, waiting for any signs of life. The attendants often worked 12-hour shifts amid the pungent stench of rotting flesh, and were not allowed to move from their posts. In addition, each corpse was fitted with a series of strings attached to fingers and toes; the strings all led to a central alarm bell which would ring at the slightest movement. Unfortunately the gases from the putrefying bodies were often sufficient to set off the bell, and there were countless false alarms.

Throughout the following decades, interest in premature burial was high, and more of these waiting mortuaries were built around the country — Ansbach, Munich, Frankfurt, Berlin. Their architecture became ever more elaborate, with classical columns and marble façades that would rival any church or mausoleum. Many of the mortuaries had separate, fancier chambers for the wealthier corpses, and later morgues upgraded their alarms with ingenious clockwork mechanisms and electric buzzers. The morgues also became something of an odd tourist attraction, even visited by literary luminaries like Wilkie Collins and Mark Twain.

The Heyday for Waiting Morgues Passes

Though similar institutions were established in Copenhagen, Prague, Lisbon, and New York, and though a few of the morgues were still operating in Brussels and Amsterdam as late as the 1870s, Germany remained the center of the waiting mortuary phenomenon. But even there the enthusiasm soon began to wane. For one thing, though the morgues were applauded for their philanthropic aspects, the fact was that few citizens actually wanted to install their loved ones in such places, and some morgues had to close for lack of “customers.” In addition, there was never any solid evidence that any corpse had ever revived after a stint in the mortuary; critics questioned the tremendous expense on something which seemed so unnecessary.

Finally, by the mid-nineteenth century, better medical instruments like the stethoscope were coming into common use, making determination of death easier. Besides that, there was also a slowly evolving movement away from unsanitary “communal” death houses and toward more individualistic inventions like “security coffins” outfitted with air tubes, lock-and-key mechanisms, firecrackers, bells, flags, and sirens.