A chance discovery and the application of high tech tools helped uncover several works of the great mathematician, feared lost for centuries. The original article I wrote can be found here. 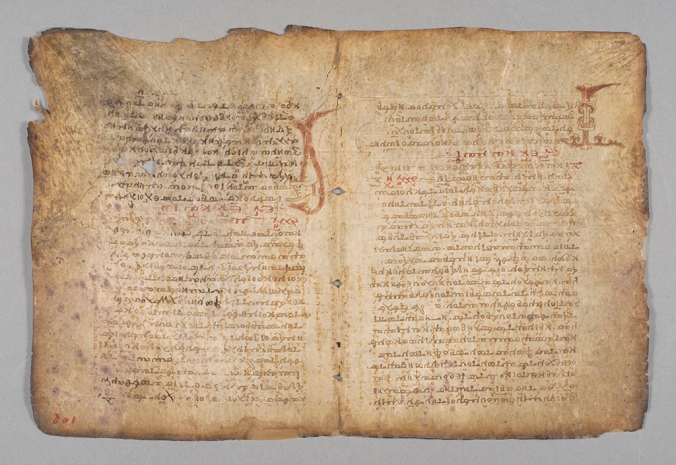 Danish scholar Johan Heiberg was probably not entirely sure what he would find when he traveled to Istanbul in 1906. All he knew was that seven years earlier, he had been browsing in a catalog detailing the manuscript collection of a Jerusalem monastery, and had come across the intriguing mention of a prayer book. This prayer book, known as a palimpsest because its original text had been scraped away and subsequently written over with the liturgical text, apparently held traces of some mathematical writings and formulas, still visible beneath the newer writing. Heiberg found the book in Istanbul, and examined its goatskin parchment under an ultraviolet lamp. Right away he realized what he was looking at: Hidden beneath the medieval-era prayers were the unmistakable work and words of the greatest mathematician of the ancient world, Archimedes.

The Early Days of the Archimedes Palimpsest

The original scrolls of Archimedes’s many written works—on the subjects of mathematics, physics, engineering, and other topics—have all been lost to history, but beginning even in his own lifetime (c. 287 BC – c. 212 BC), scholars in Greece made copies of his works. These copies eventually found their way to the Middle East, where even more copies were laboriously written out. The collection of works now known as the Archimedes Palimpsest was probably copied in Constantinople in the 5th century, and managed to survive that city’s sacking by Crusaders in 1204. But only a few decades later, in a monastery called Mar Saba near Bethlehem, Archimedes’s writings were meticulously scraped from the page by monks who often “recycled” paper this way. The leathery pages were then washed and written over, and bound into a prayer book.

The Modern History of the Palimpsest

The works remained hidden until Heiberg’s discovery in 1906, and after he published his findings the palimpsest mysteriously disappeared, and was suspected stolen. It did not turn up again until the early 1920s, in the collection of a French businessman named Marie Louis Siriex. The book passed to his daughter in 1946 and it was evidently she who made the rather puzzling decision to order the forging of four Byzantine-style paintings of the Evangelists over the prayer text; she may have thought she was increasing the book’s value. In 1998, the family put the palimpsest up for auction at Christie’s, and though there was some legal wrangling with the Jerusalem Patriarchate, who claimed the artifact had been stolen, the sale went ahead as planned. The palimpsest passed into the hands of an anonymous American buyer for the sum of $2 million.

The new owner of the artifact immediately placed it with the Walters Art Museum in Baltimore, Maryland, and provided funds for research and restoration, for aside from the overwritings and clumsy forgery attempts, the manuscript was in dreadful shape, torn and covered in mold. But once the team of scientists began studying the palimpsest, using ultraviolet and infrared photography, x-rays, and digital imaging, the results were clear and momentous. For the Archimedes Palimpsest contains not only the nearly complete text of a previously unknown work, titled On the Method, but it also boasts a large portion of On Floating Bodies, the original Greek text of which is lost. In addition, there is a page of another unknown work, Stomachion, and several fragments of other of Archimedes’s works on geometry. Finally, there are ten pages containing previously unknown speeches by 4th century Athenian politician Hyperides.

Though it may have looked like nothing more than a common medieval prayer book, the application of modern technological wizardry brought its priceless secrets to light, and as work continues, there are sure to be more treasures in the offing.

One thought on “Deciphering the Archimedes Palimpsest”