Yesterday, as I was indulging in that great American pastime of frittering my workday away on the internet, I suddenly and quite inexplicably became obsessed with reading various publications’ rankings of the top 100 horror films and scenes. Unlike a large majority of the commenters on these pieces, I don’t so much read these types of posts to quibble with the films that were chosen or get into a lather about ones that were left off; I am, rather, simply very interested in what films other people chose and why they felt the way they did about them. The list I liked the best, incidentally, was this one from TimeOut London that was ranked according to votes from various horror heavy-hitters. It is, in my opinion, a great, diverse list that pretty equitably spans all genres and eras of horror and even threw in a few curveballs and non-traditional choices. Besides that, the recaps of the films were in-depth, informed, and insightful.

Reading all these lists inspired me to do a similar thing on this blog, though frankly I think I will stick to just calling out particular scenes in horror films that stuck with me through the years, and try to analyze why they made such an impact on me. That’s not to say that I might not do a “Goddess’s Top 100 Horror Films of All Time” one of these days, but at the moment I have a lot of other projects pending and don’t have enough free time to rewatch all the films I’d like to feature just so I can remember specifics. So consider this the first in a series of however many of my favorite creepy movie scenes that I’d like to write about. 🙂

The scene I’m going to feature first was a no-brainer for me; it was the first one that popped into my head when I decided to do this series. I have always said (to myself, mostly) that many of the scariest scenes in film don’t even come from what would normally be considered horror films. For a long time, I thought I was pretty much alone in this opinion, but then, in all my horror-list wanderings, I came across retroCRUSH’s 100 Scariest Movie Scenes. And right there, at number one, was SWEET VINDICATION. 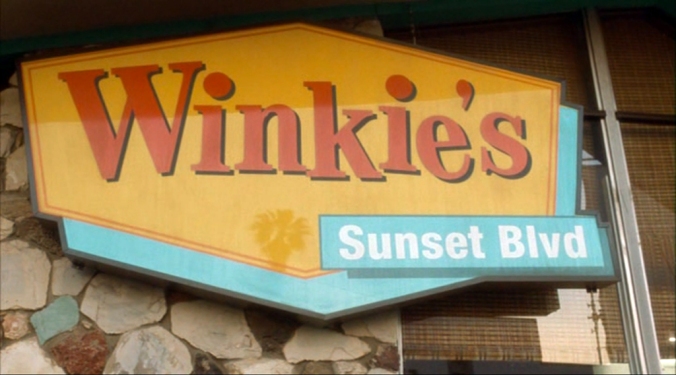 If you have not seen David Lynch’s masterful 2001 mystery Mulholland Drive, kindly do yourself a favor and get on that shit tout suite. For real, I’ll wait. It’s a sinister layer cake of creepy-awesome that rewards multiple viewings, like a rich, nightmarish puzzle that taunts you with its dark, schizophrenic glamor.

The setup of the five-minute diner scene is mundane in the extreme. Minor characters Dan (Patrick Fischler) and Herb (Michael Cooke) are sitting in Winkie’s Diner in broad daylight. Dan is telling Herb about a recurring dream he’s had that took place in the very diner they’re sitting in. It all sounds fairly humdrum until Dan says that there is a man behind the diner. “He’s the one who’s doing it,” Dan says, though he doesn’t elaborate on what ‘it’ might be. “I can see him through the wall.” He then tells Herb that he hopes he never sees the man’s face outside of a dream, with the implication that the face is too horrible for him to describe. Dan looks sweaty and intense and apprehensive as he talks, haltingly. Later in the scene, Herb takes Dan outside in an attempt to show him that the man in his dream is not really back there, and this goes about as well as you’d expect. 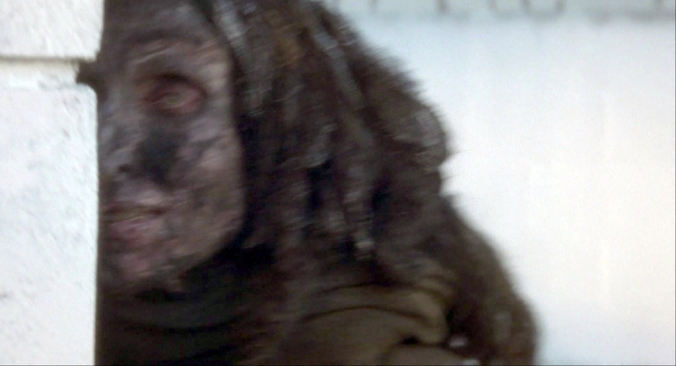 What is it about this scene that gives me the heebie-jeebies every single time I watch it? It isn’t the most obvious “scare,” the sudden appearance of the nightmare man from behind the dumpster. That’s sort of freaky when it happens, in a jump-out-of-your-seat way, but it’s not particularly dread-inducing. No, the scariest part of the scene is everything leading up to that: Dan’s strangely rubbery facial expressions and lopsided nervous grins, the flat affect of his voice as he describes the dream, the way he seems to say a great deal without saying much at all. One particular moment that actually caused a chill to rocket up my spine was when Dan was saying that Herb had also made an appearance in the dream. “You’re standing right over there…by that counter.” The camera pans slowly over to the counter, at which no one is currently standing, then focuses back on Dan’s anxious face. “You’re in both dreams, and you’re scared.” A few minutes later, Herb goes to pay for their lunch, and thus actually is standing right where Dan saw him standing in the dream. The men share an extremely unsettling glance across the diner. Also rather nerve-wracking is the men’s walk out to the dumpster behind the diner. Every shot, every camera angle, every edit as they walk seems pointedly calculated to be as skin-crawlingly sinister as possible, but without being obvious or overtly frightening in any way. It’s a fantastic trick, and I wish I could figure out how Lynch so effortlessly achieved it.

The retroCRUSH rundown also pointed out that this scene should absolutely not be as eerie as it is, because Dan basically describes exactly what’s going to happen, and then it happens. Normally structuring a scene like that would only serve to take away any tension, but in this scene it’s precisely the opposite. There is an inevitability to the scene; both Dan and the viewer know that something bad is going to happen, but neither are able to prevent it, and the dread the viewer feels in Dan’s stead makes the scene, for me at least, very difficult to watch without looking away.

I am amazed that Lynch managed to film such an ominous scene out of elements that are anything but scary at first glance (other than the nightmare man’s horrible face, that is), but I’m even more amazed by the fact that he’s done it more than once. Lynch is a master at something I tend to call time displacement, for lack of a better term. He has filmed several scenes in which the line between reality and nightmare is blurred, of course, but he also seems to have a similar predilection for playing with overlapping timescales, characters being in two places at once, and that type of thing. In 2006’s Inland Empire, for example, the intensely freaky-looking Grace Zabriskie (as Visitor #1) points to an empty couch in Laura Dern’s house and tells her that if it was tomorrow, she would be sitting right. Over. There. And then suddenly it is tomorrow, and Laura Dern is sitting exactly where the old woman said she’d be sitting. There is also the famous scene from Lost Highway (1997), where a white-faced Robert Blake tells Bill Pullman that not only is he standing there talking to him, but at the same time, “I’m at your house right now.” Every single scene Lynch has filmed like this has freaked me right the hell out, and I can’t quite put my finger on why that might be. Perhaps because when done well, these scenes serve to undermine the fulcrum of reality and make the viewer feel completely adrift in a universe that makes no rational sense. Or maybe it’s the fact that Lynch, better than any other filmmaker in my opinion, is cursedly skilled at portraying the incongruity of dreams on film, so that we almost feel as though he’s directly tapped into our collective subconscious and forced us to look unflinchingly at what’s lurking there. Or it could be his consummate talent for utilizing slightly off-kilter facial expressions, camera shots, voice inflections, and background sounds to convey an unsettling mood. Whatever the reason, I suppose it just goes to show that in the right hands, traditional horror movie monsters and situations have nothing on a simple shot of the back of someone’s head, or a strangely intense glance, or a daylight stroll through a diner parking lot.

3 thoughts on “First in a Possible Series: The Goddess’s Favorite Creepy Movie Scenes, or Why the Fuck Does David Lynch Freak Me Out So Much?”