Despite my oft-repeated love of subtle, atmospheric horror, I will also admit to being something of a gorehound. And I’m assuming that my fellow gorehounds will be intimately familiar with the works of the legendary Italian filmmaker Lucio Fulci. Although Fulci made movies in pretty much every conceivable genre (comedies, westerns, thrillers, cop dramas), he is today primarily remembered as The Godfather of Gore, and widely beloved for scenes like these: 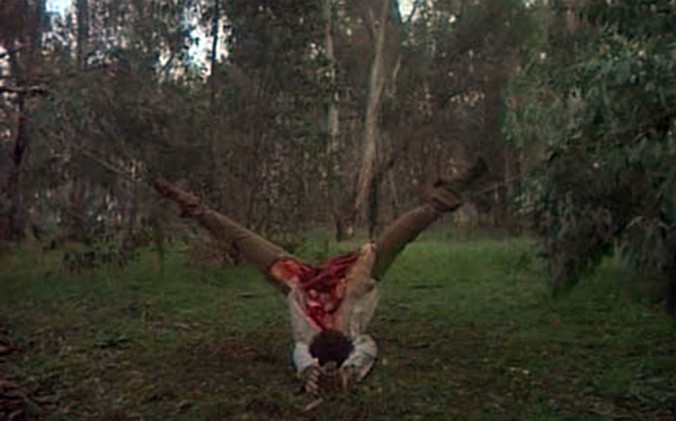 I’M HALF THE MAN I USED TO BE 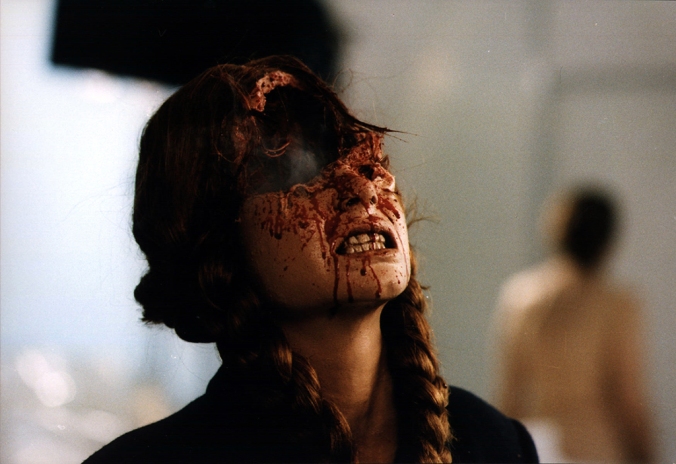 NO GUTS, NO GORY

However, true to my contrarian nature, I’d like to discuss one of Fulci’s lesser-appreciated horror films, one that is perhaps not as colorful as the above examples, but serves as a reminder that the cranky, bespectacled Italian was more than capable of producing a disturbing, relatively low-key scare experience without necessarily resorting to buckets of blood and entrails.

1989’s The House of Clocks (aka La Casa nel Tempo) was actually filmed for Italian cable television, but was considered too violent for TV. It never aired, and was later relegated to direct-to-video hell. Briefly, it tells the chilling story of an elderly couple, Victor and Sarah (Paolo Paolini and Bettine Milne) who are set upon by a group of three robbers in their palatial home in the country. The gang sort-of-accidentally murders the oldsters during the attempted heist, but then they begin to notice that some weird-ass shit is going on in the spooky old mansion. The countless clocks around the place all mysteriously stop at the exact moment the couple are killed, and thereafter follows a bizarre narrative where time itself appears to be running backwards. The crotchety codgers seem to return from the dead to take revenge, but then they are apparently killed again, and then other people are returning from the dead, and then it turns out that the robbers were just high the whole time and never even entered the house at all, but then they get killed in a car crash before the robbery even happens, or something…? Anyway, like many Italian horror movies, the plot doesn’t really make a lick of sense, but if you can just go with the flow and soak up the unsettling, well-constructed atmosphere, then I think you’ll find that House of Clocks is a wonderfully eerie and underrated film in Fulci’s vast canon.*

one, you lock the target.

One thing I’ve always appreciated about this movie is its use of one of my favorite horror tropes: Malevolent Old Folks. Sure, lots of movies have spooky children, but fewer utilize the other end of the age spectrum in such an effective way. Creepy old people are creepy, I assume, for one of the same reasons that creepy children are: namely, that people tend to view both children and the elderly as rather innocent and harmless, so when they go bad, it fucks with our sense of perspective about how the world should work. Old people, though, also have the additional creep factor of being far closer to death, thus subconsciously reminding us of our own impending decline and inevitable expiration.

Victor and Sarah are a prime example of this. I find that I almost want to compare them to the evil Castavets from Rosemary’s Baby, though where the Castavets lured the Woodhouses into their web using a sort of potty charm and conscientiousness that bordered on bullying, Victor and Sarah feign a doddering helplessness to throw the gang of robbers off their game. The suspense in House of Clocks comes from the fact that viewers are aware right from the beginning that the old folks are not the sweetly genteel grandparents they appear to be. In the very first scene, for example, the sexually-ambiguous housekeeper creeps around the mansion with clear trepidation, and eventually stumbles upon a hidden chapel containing two rotting corpses in wedding clothes who have been stabbed through the throat with huge nails. And the next scene shows Victor, in his gentlemanly black suit, entering the dining room for breakfast. He picks up and pets a kitty cat, then he notices a pretty little bird sitting on the open windowsill. He feeds the bird some toast and coos at it, looking lovingly down at the tiny creature just seconds before he smashes it to death with his cane. And directly afterwards, there’s a really disturbing sequence where Victor and Sarah are in the chapel with the dead bride and groom. Victor casually hammers the bride’s throat-nail in deeper, and then brushes some dust off the groom’s coat. Sarah peers through her glasses and shakily reapplies the bride’s lipstick, then kisses her forehead. All the while, the geriatric pair are sadly lamenting to the corpses (who are their nephew and his wife, it turns out) that they were ungrateful little shits who were only after the couple’s money. So yeah, Santa and Mrs. Claus these two ain’t.

we could have just put lumps of coal in your stockings, but we decided to throat-stab you instead.

By now, you’ve probably got the gist that these fossils are definitely not to be trifled with, but Fulci isn’t done. The very next scene shows the housekeeper, Maria (Carla Cassola) approaching the greenhouse. She passes one-eyed groundskeeper Peter (Al Cliver), who appears to be digging a grave in the garden. She then goes into the greenhouse and finds Sarah fussing over her flowers. She informs Sarah that she will have to be leaving the couple’s employ to care for her mother. Sarah takes this all in stride, making sympathetic and understanding noises right before swiftly turning, grabbing some kind of spear-like garden implement, and stabbing Maria right in the delta of Venus.

YOU CAN’T QUIT, I’M FIRING YOU!

The cool thing about the first twenty minutes of the film is that Fulci takes his time setting up the couple’s murderous streak in spades, so when the robbers show up, you’re thinking, “Oh man, did you dipshits pick the wrong house to plunder.” But then he toys with our expectations by having Victor and Sarah get blown away almost immediately.

YOU THINK A GAPING CHEST WOUND IS GONNA STOP THIS LADY? HELL NO. SHE’S A PISTOL, THAT ONE.

It is only then that the viewer realizes that not only can the feisty seniors handily kick ass in this life, but also apparently can bend space and time to their will, making them able to fuck your shit up before you even did anything. There should be some kind of hardcore AARP for these two to join, is what I’m saying.

Also, is it weird that I sort of wish Victor and Sarah were my grandparents? Sure, you’d never, ever ask them to borrow fifty bucks to cover your electric bill, but if you were super nice and appreciative they’d probably have you over to their wicked-cool mansion for tea and scones, and if anybody ever messed with you, your beloved Nana and Pop-Pop could take care of your little problem with a minimum of fuss, even returning from the dead to do so if necessary. Just a tip, though: if Victor and Sarah do you the favor of gorily eliminating one of your sworn enemies, the least you can do is call them on their birthdays or bring them a case of Ensure or tape that Matlock marathon for them or something, for heaven’s sakes. You know, give something back, that’s all they ask. 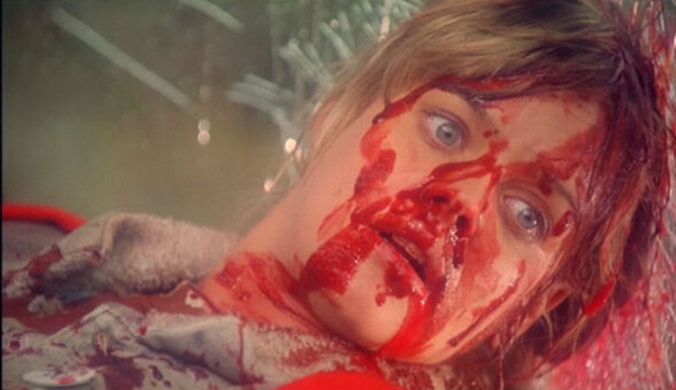 should have given nana those coffee coupons, shouldn’t you? she did ask nicely.

Until next time, Goddess out.

*If you’re a Fulci fan, keep watching this space, because I eventually want to do a writeup on another of Fulci’s underseen gems, 1977’s The Psychic (aka Murder to the Tune of Seven Black Notes).

2 thoughts on “The Goddess’s Favorite Creepy Movie Scenes, or Time Ain’t on Your Side”