One of the main underlying themes of a lot of these blog posts is an examination of why particular moments in horror film, literature or music made a lasting impression on me while others did not. Why, for example, was I terrified by the bubbling cauldron sound at the beginning of “The Monster Mash”? Or the schlocky scene in My Bloody Valentine where the homicidal miner pops out of the closet with the pickaxe? Or the part in Fright Night where Amy reveals her horribly wide terror-mouth? I still have no idea, but it’s been fun reliving all this stuff from my wayward youth and trying to find some kind of perspective on it, or contemplating the threads that might tie all these disparate things together.

The next scene I want to discuss is another one of those that, for whatever reason, has stuck with me for 35 years, even though I don’t remember much about the rest of the film. The scene itself was only a couple of minutes long, but I can still vividly remember the heart-stopping shudder that traveled through my body the first time I saw it, and further recall how I studiously covered my eyes during the scene on subsequent re-watches of the movie.

Before I get to the main feature, allow me another short commercial break. I still have a Patreon campaign going to fund my writing work, and there are lots of neat rewards just for pledging a few bucks a month, so check it out, won’t you? Thank you. And now back to our regularly scheduled programming.

Seems to me I live my undeath like a candle in the wind.

John Badham’s version of the classic Dracula (1979), starring Frank Langella as the titular Count, came out around the same time as a few other vampire films, notably Werner Herzog’s elegant remake of Nosferatu. Badham’s adaptation wasn’t horribly reviewed, but apparently audiences were experiencing some vampire fatigue, and it only did so-so business at the box office. I was only seven when it was released in theaters, so I didn’t catch it until it ran on television a year or two later; in fact, I’m fairly sure it was the first of the major Dracula film adaptations I ever saw, even before the more-famous Bela Lugosi and Hammer versions.

Like the 1931 Bela Lugosi film, Badham’s Dracula was based on the stage play rather than the novel, and followed a lot of the tropes of the Universal version. For example, Dracula is portrayed as a seductive, romantic figure rather than a ratlike monster as in the book, and the entire first part of the novel (where Harker is kept prisoner in Dracula’s Transylvanian castle) is scuttled, allowing the movie to start with the Count’s arrival on English shores. Something the Badham film does that I thought was odd, though, is that it reverses the characters of Lucy and Mina; Mina is the first one attacked and vampified by Dracula, for example, while Lucy is Harker’s fiancée, and is attacked later but ultimately saved when the vampire is staked. The film also portrays Mina as the daughter of Van Helsing and Lucy as the daughter of Dr. Seward. These changes don’t ruin the story or anything, but they also don’t really add to it, so I’m not sure why they were made. Perhaps because some characters were eliminated for brevity (like poor old Quincey Morris, who hardly ever gets a part in these adaptations), the screenwriter thought it would increase the drama and emotional coherence of the characters to make them all related somehow, but I’m just speculating about that. Still doesn’t explain why Lucy and Mina were reversed, but whatever.

As I said, I don’t remember a great deal about the film as a whole; I remember enjoying it, and being quite taken with Langella’s graceful performance as the Count, but even though I saw the movie several times when I was about nine years old, very little of it made a lasting impression. Except for that one, very brief scene.

If my quick Google search is any indication, I’m not the only one that has had this scene burned into my memory for more than three decades. I’m not entirely sure why the scene is so memorable; it could be simply because in the context of the film, it is so shockingly unexpected. This version of Dracula, after all, was marketed more as a supernatural romance than a horror film, and played rather like a staid English parlor drama (with fangs). There was little to no gore that I remember, and nothing that was outright frightening. But then this happens:

The lovely Mina (Jan Francis) has been exsanguinated by the foxy Count one night while her friend Lucy (Kate Nelligan) is out tramping it up with Jonathan (Trevor Eve). It makes me feel weird to even type that, you guys. It’s like they were cheating or something, what with the character reversal and all. Though now that I think about it, how great would a Mina/Lucy catfight scene have been? Anyway. The next morning, Mina is pale and gasping for breath, and dies as a horrified (and guilty) Lucy looks on. Dr. Seward (Donald Pleasance) has no idea what could have killed Mina, and summons Dad Van Helsing (Laurence Olivier) to help solve the mystery.

No slouch, Van Helsing immediately jumps to the most obvious conclusion, that eine nosferatu is running loose in the vicinity. As an aside, though, this is Van Helsing we’re talking about. He probably blames a vampire every time one of his socks disappears from the washing machine. Sure, he was correct in this case, but even a stopped clock, yadda yadda.

Anyhoo, Seward and Van Helsing visit Mina’s new grave in the cemetery, and find that her coffin is not only empty, but contains a ragged hole where she presumably dug herself out. The hole leads underground into some old mining tunnels, and they crawl down there to investigate, pretty sure of what they’re going to find. As they peer into the darkness, visions of the beautiful Mina probably uppermost in their minds… 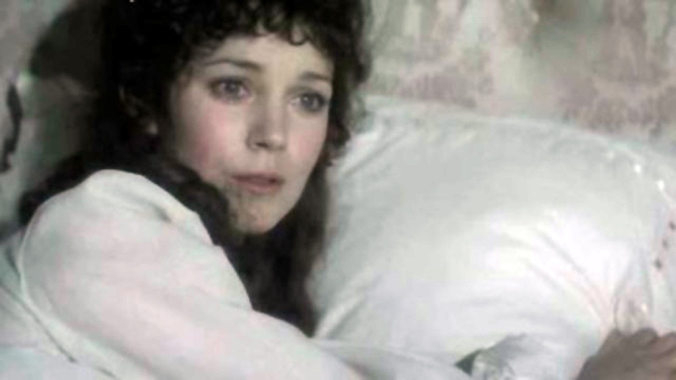 …they begin to hear a shuffling sound coming toward them. They raise their lamps or candles (I can’t exactly remember which, and can’t find the scene on YouTube to check), and there, emerging from the darkness, is this horror, reaching for them and begging for a kiss:

At least she has a good personality. Well, aside from the bloodsucking.

This shit scared me SO BAD, you guys. And in this sense maybe it was a sound storytelling idea to make Mina Van Helsing’s daughter, because the tragedy of the scene is very apparent here, and underscores the horror with great effectiveness. The figure of the undead Mina is terrifying but also heartbreakingly pitiful, and the viewer really feels it when Van Helsing has to put down the monster his daughter has become. The rest of the film isn’t nearly as powerful, but that one scene is a stunner.

Keep watching this space for more of my horror-related wanderings, and news on my upcoming poltergeist book! Until then, Goddess out.