Greetings, minions! Today I’m doing something a little different on this humble blog: I’m actually reviewing a movie that came out in the 21st century! And no, before you ask, I haven’t been abducted by extraterrestrials and replaced with a replicant, so don’t worry your pretty little heads about that, carbon-based life forms. Hu-mans, I mean. Wait, did I get that right? *checks with mothership*

Anyway, what happened was that writer/director Doug Roos contacted me on my Facebook author page and very nicely asked me to review his indie horror film, The Sky Has Fallen, and gave me the super secret hookup for the screener. If you would like to see it yourself, you can buy it on Amazon right here, but obviously you’re gonna have to pay, because you’re not as cool as me. So since I know what a bitch it is out there for independent artists, and how hard it is to get anyone to pay attention to what you create, let alone write at length about it, I was happy to oblige.

Roos raised the money for The Sky Has Fallen on Kickstarter, and in his pitch he played up the fact that the film was going to be 100% practical effects, which is rad and hopefully indicative of a larger trend, because I’m frankly kinda sick of looking at copious amounts of CGI and would love a return to more traditional special effects (as evidenced by my orgasmic review of Mad Max: Fury Road). The film was actually released in 2009, and went on to win several awards, including Best Feature at both the Indie Gathering Film Festival and the Freak Show Horror Film Festival.

In the interest of trying not to post spoilers, I will just give a very basic overview of the film. It’s nominally a zombie movie, I guess, though the zombies are not your run-of-the-mill undead, but rather people who succumbed to a mysterious fast-acting virus—which wiped out most of humanity—and subsequently fell under the mind control of a group of equally mysterious black-robed figures and their faceless, white-robed leader. These shadowy figures also seem to experiment on and eat their victims for some unknown purpose. This is an interesting premise, and I actually wish it had been explored in more depth; I’m usually all for subtlety and not over-explaining things in your horror movie, but in this case I wanted to know who these figures were (aliens?), if they were the ones responsible for the killer virus, and what their endgame was with the mind-control and the experimentation and the flesh eating. Maybe these questions were answered obliquely during the course of the film, but I wasn’t astute enough to pick up on it.

The film is pretty much a one-location, two-character piece, following survivors Lance (Carey MacLaren) and Rachel (Laurel Kemper) as they traipse through the woods, periodically slash their way through groups of gore-faced shamblers, fall in love, and have nightmares, flashbacks and existential conversations as they quest to kill the white-robed leader, which they hope will bring an end to the horror. I admit this aspect of the film got a little repetitive, as it seemed as though the conversations the characters had were all of a similar nature, and the scenes of them fighting the zombies were pretty much interchangeable. I feel like it might have worked better as a short film, as some of its hour-and-twenty-minute runtime felt like filler. It actually seemed like it was structured more like an Asian horror film, with repeating patterns rather than a standard Western three-part plot arc.

That said, the faceless leader was pretty damn cool-looking, and the shadowy figures suitably creepy. The effects were also quite good, very Fulci-esque, and gorehounds should be happy with the buckets of blood, hacked limbs, severed heads, eye-gougings and oozing wounds on display. I would have liked to see more of the blades and bullets actually impacting flesh, though, as most of the kills consisted of a shot of Lance swinging his katana, swiftly followed by a shot of a bloody head or arm rolling on the ground. The editing overall, in fact, was a little strange and stylized, and there were a lot of close-ups where sometimes I wasn’t really sure what I was looking at. 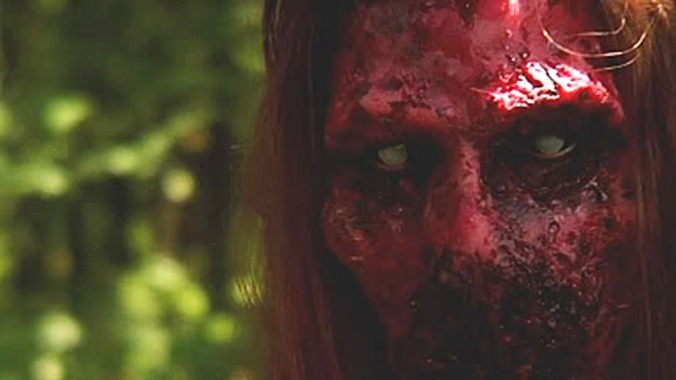 The acting was decent for a low-budget indie, but I never really got the sense that these were real people dealing with a worldwide epidemic that had been going on for two months. They looked too clean, for one thing, and didn’t seem at all hardened by their experiences both during and following the apocalypse. I also thought the final revelation vis-a-vis Rachel’s identity was a little forced. The limitations of the budget are fairly obvious too, as the film’s single forest location gives no sense of scope to the cataclysm the characters are describing.

All in all, I didn’t love it, but keep in mind that other than “The Walking Dead,” which I adore, the last zombie things I really enjoyed were both horror comedies (Dead Snow and Zombieland, in case you wondered). I think in general the zombie genre is pretty burned out at this point, though The Sky Has Fallen did have a fairly original concept, and I understand that zombie films are probably the easiest horrors to make on a nothing budget. I’d be interested to see what Roos could do with more money, as long as he retained his obvious enthusiasm for the genre and for old-school gore effects.