Welcome back to the Hulu Horror Double Feature series, and hey, I’m actually getting to do another one of these way before I thought I’d be able to, so go me! If you want to read the first installment and get your bearings, it’s right here, don’t fret. 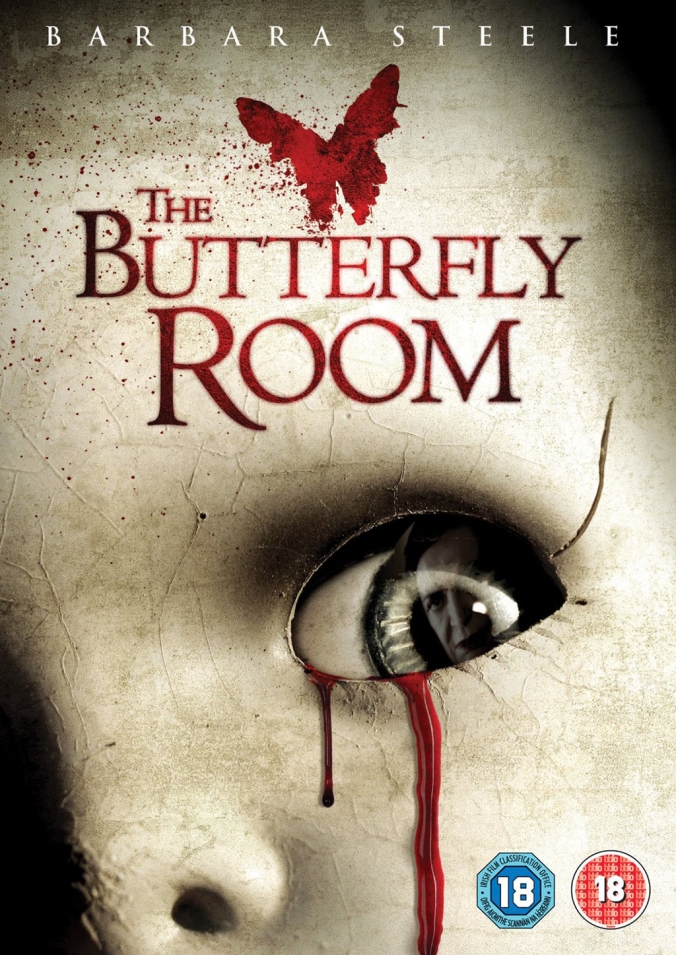 First up, The Butterfly Room from 2014. I actually picked this one at random because the cover and blurb looked promising, but only after I started watching it did I realize that it starred Barbara Steele! BARBARA STEELE! Have I mentioned on this blog how much I love Barbara Steele? Because I fucking love Barbara Steele. And besides that, this movie is a veritable overflowing cauldron of well-known horror-type ladies, seeing as how it also features Heather Langenkamp (from A Nightmare on Elm Street, obviously), Erica Leerhsen (Blair Witch 2, the Texas Chainsaw Massacre remake), and Camille Keaton (I Spit On Your Grave, What Have You Done To Solange). There is also a cameo from PJ Soles (Halloween), and who is that turning up in a brief walk-on as a cab driver? Why, it’s Joe Dante! Even if the movie wasn’t any good, you could still turn it into a pretty rad spot-the-horror-legend drinking game, if you were so inclined.

So, IS the movie any good? That depends. It’s a weird one, that’s for sure, and mamma mia, is it Italian. This is actually not surprising, since it was directed by Jonathan Zarantonello from his own novel, Alice dalle 4 alle 5 (Alice from 4 to 5). If you approach The Butterfly Room with this in mind, and get into a sort of early-Dario-Argento-slash-Mommie-Dearest kinda headspace, then I think you’ll probably love it. It’s gorgeously shot, Barbara Steele is CREEPY AS HELL as the butterfly-collectin’ Ann, and there are some pretty fucked-up family dynamics going on all around. On the downside, the acting is a bit stilted and over-the-top, so much so that it seems like a deliberate directorial choice (again: Italian). And while the plot is mysterious enough to keep you watching, it’s pretty easy to guess where we’re going to end up. The timeline jumps back and forth a lot, which sometimes makes it hard to follow, but I don’t think the non-linear narrative was really necessary to what the movie was trying to say. I also wish they had gone with a different soundtrack, maybe classical, since the vaguely heavy-metalish score is pretty jarring and doesn’t seem to match up with the film’s aesthetic. All that said, though, I enjoyed the hell out of Barbara Steele evilling all over the screen like the witch in Snow White, and I kinda loved the “like mother, like daughter” theme that pervaded the entire enterprise. I would recommend the film to fans of Barbara Steele (BARBARA STEELE!!!) and anyone who’s into the early films of Argento and Bava, or giallos in general (although this isn’t a giallo, I hasten to add).

Next on Hulu’s movie-pickin’ agenda was House of Good and Evil (2013). This was another film on the slow-burn psychological horror tip, and as such I found myself digging it a great deal. It’s marginally a haunted house story, but it’s ambiguous enough to keep you guessing right up until the end. Briefly, it deals with a married couple who are trying to start over out in the sticks after abusive hubby Chris beats his wife Maggie into an eighth-month miscarriage. He seems contrite, and she’s willing to give him another chance, though obviously tempers are short between them. They buy a duplex with no phone service and no electricity, thinking that being forced to live with just one another will solve their problems, but it isn’t long before shit starts to go south, both in their marriage and with the house they’ve purchased.

As with the previously-discussed Soulmate, this one might be a drag for fans of more action-packed horror, but I thought its restraint and subtlety gave it great, creepy power. The manifestations of the “haunting” were so simple and understated — the frequent ringing of an old-fashioned telephone, the mysterious nature of the mostly-unseen elderly neighbors — that I was compelled to pay close attention as the eerieness ramped up. The fact that there was palpable tension between the husband and wife at the center of the story just added to the atmosphere, and I liked that the movie played with elements of paranoia (as it seems like people are conspiring against main character Maggie), á la Rosemary’s Baby. Plus the way the Andersons next door were folded into the tale reminded me pleasingly of the Allardyces in Burnt Offerings. It had touches of The Amityville Horror too, now that I think of it. I would definitely recommend this to fans of any of the three films I just mentioned, as well as to anyone who would enjoy a low-key haunted house movie with a psychological bent. Keep in mind, though, that it does have a sort of “twist” ending, and though I thought it worked, I can see how some viewers might be pissed off by it, so your mileage may vary.

One thought on “Hulu Horror Double Feature: The Butterfly Room and The House of Good and Evil”