I know it’s been a while since I’ve done one of these, but that’s mostly because my laptop and browser at home are so damn ancient that I can no longer watch Hulu on there. But I managed to wangle another computer that Hulu worked on, and I did it all for you guys. Considering the double bill I got handed today, though, I’m actually kinda sorry I bothered, but since I did, let’s soldier on to the reviewin’, shall we? 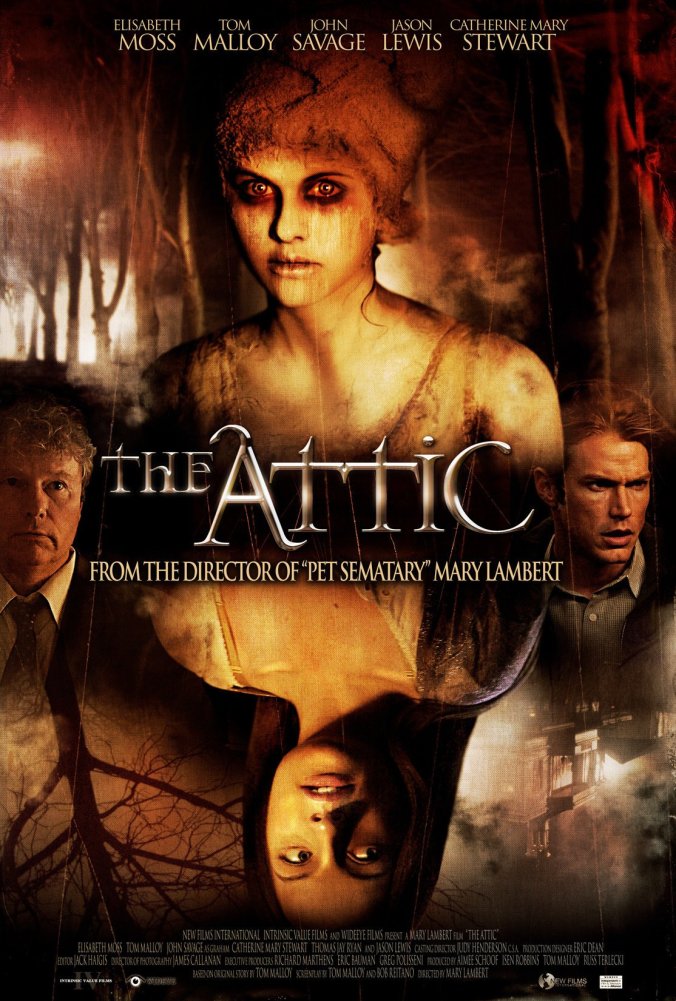 First up, The Attic from 2007. This one actually sounded pretty promising going in, as it was directed by Mary Lambert (of Pet Sematary fame) and starred a pre-“Mad Men” Elisabeth Moss. The description sounded like a fairly standard haunted house/evil twin tale, but I really like those, as regular readers will know, so I dived right in.

In brief, it’s the story of a college girl named Emma who moves into an old house with her mother, father, and mentally challenged brother (played by the screenwriter, Tom Malloy), and subsequently develops agoraphobia, an eating disorder, and a severe case of seeing creepy shit at every turn. The largest proportion of the creepy shit she sees is an apparition of a girl who looks just like her, except with ghostly makeup on. She becomes convinced that she had a twin sister named Beth who died twelve days after she was born, and she starts to believe that her parents killed Beth because she had a birth defect, and/or that they are into black magic and are trying to bring Beth back from the dead to kill her for some reason…? Aiding her in her investigation/delusion is a house-calling psychologist who may or may not be banging her mom, and Ridiculously Photogenic Paramedic/Police Detective Guy Who is Also Maybe a Real Estate Agent and Almost Definitely a Demon, I think? Emma gets crazier and crazier during the course of the film, and you kind of really don’t know if she actually is nuts or if her parents really are The Worst™, because they act like sketchy shitlords through most of the movie. Then you find out that yeah, Emma really is crazy and imagining everything, except maybe not because the house is doing it somehow, with the help of the low-rent James Dean demonic paramedic dude? Hell, I don’t know.

A few things. I really wanted to like this movie. I loved Elisabeth Moss on “Mad Men,” and I’m a fan of Pet Sematary as well. And I’m not gonna say The Attic sucked completely; I mean, I sat through the whole thing and it didn’t get on my nerves too much, and I was interested enough in the plot to keep watching until the end. But it had some really major problems. First off, the acting was really…let’s be charitable and call it “uneven.” Elisabeth was sort of okay, but kind of all over the place; you could tell what she was shooting for, but she wasn’t quite getting there and it was a tad off-putting. Catherine Mary Stewart was fine as her mom, but was only in a few scenes and didn’t make much of an impression. John Savage played her dad, and I don’t know what the hell was going on with him, because it was a really strange performance, just weirdly gruff and kinda dyspeptic. The retarded brother was all right, if just a shade on the overdone side. All in all, the cast didn’t really gel all that well, and it made for a really bizarre, uncomfortable dynamic throughout the whole film. I guess if you viewed it as entirely seen through Emma’s warped sensibilities, then it makes some kind of sense, but I don’t know if that was what the filmmakers intended, and it wasn’t obvious during viewing, so even if it was intentional, then it was not very well handled.

Also, the resolution of the plot was kind of lame, and didn’t really give a clue as to the true nature of the haunting, or whatever it was supposed to be. What exactly was in the house, why did it manifest itself the way it did, and what did the chisel-jawed paramedic fella have to do with all of it? Was he, like, a sorcerer, or what? How come the girl who had lived in the house thirty years previously also saw a ghostly döppelganger, just as Emma did, but then the girl who moved into the house at the end just saw the James Dean guy in the attic mirror? And if Emma had imagined everything about James Dean guy, then how come the gun he gave her was real enough to kill people with? It just made no damn sense.

So, in the aggregate, not a terrible film, but pretty dumb, disappointing, and kind of a hot mess. But little did I realize that The Attic would look like fuckin’ Shakespeare next to the following movie that Hulu barfed up for my weary eyeballs. Sigh… 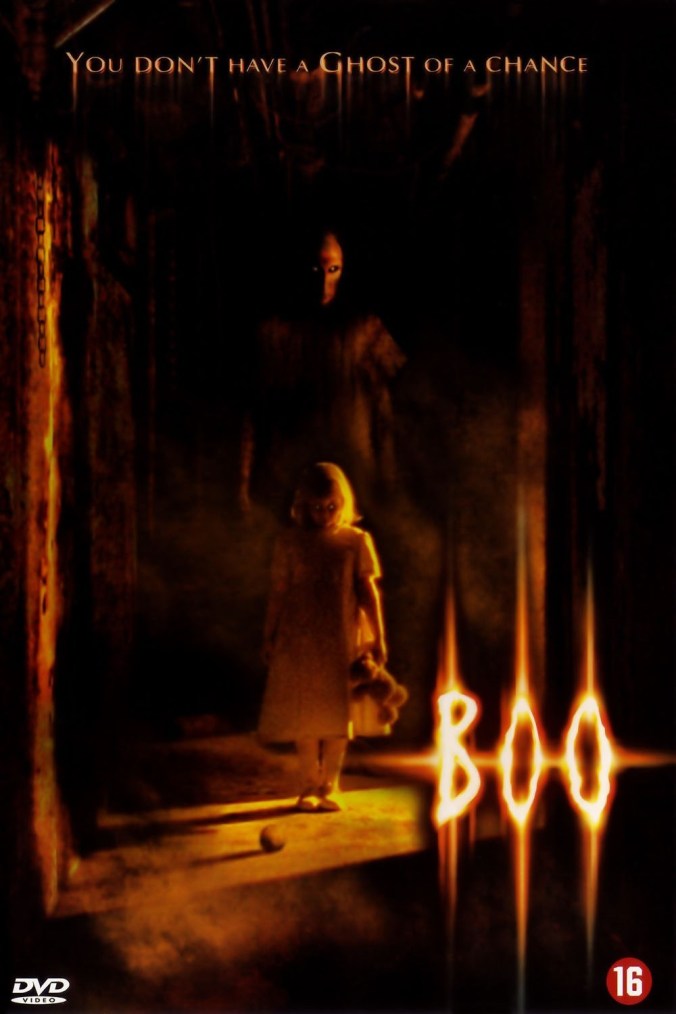 Boo came out in 2005 and was the debut film of a dude who used to write for Fangoria. You’d think that a guy like that would have a fairly firm handle on what makes a decent horror flick, but in this case, you would be tragically and utterly incorrect. In short, this was a run-of-the-mill teen slasher that was trying very hard to be a fun mashup of Scream, Halloween, Night of the Demons, and Session 9, but just ended up falling flat on its face with wildly inconsistent acting, a stupid and unnecessarily convoluted concept, bad CGI, and a plot that dragged out longer that Berlin Alexanderplatz.

Just recapping it here is making me tired all over again, so I won’t really go into many more details except to say that it concerns a bunch of dumb-ass college students who go to spend Halloween at an abandoned mental hospital that’s supposed to be haunted. You can probably guess what’s gonna happen from there. The only highlights of the film were the copious amounts of drippy gore, a brief cameo by Dee Wallace Stone as a nurse, and the sadly underdeveloped subplot of the grizzled cop character who had once starred in a series of blaxploitation films under the name of Dynamite Jones. I actually wished I had been watching one of his movies—particularly Count Pimpula—instead of this irritating, overlong bullshit. Meh.

And that’s all she wrote for another Hulu double feature installment. Until next time, keep it creepy, my friends. Goddess out.

One thought on “Hulu Horror Double Feature: The Attic and Boo”