So, quite by accident, I ended up having kind of a Satan-baby theme to my Hulu watching experience today. Not that there’s anything wrong with that; I like a good demon-infant tale as much as the next girl, and this afternoon I got two for the price of one (well, the movies were free, and one of them sucked, but y’know). Oh, also, both movies had parenthetical titles, so there’s that.

By the way, speaking of demons, my new book House of Fire and Whispers: Investigating the Seattle Demon House is out in both print and ebook, in case you hadn’t heard. Pick up a copy, won’t you? And if you like it, please leave a review on Amazon; it really does help. Thank you. And now, on with the show.

First up, Delivery: The Beast Within (2013) was directed by Brian Netto and fuses two overplayed horror tropes—the aforementioned “devil’s child” angle with the ubiquitous found-footage platform—into something that turned out quite creepy, compelling, and far, far better than I expected.

In brief, the movie is a sort of mockumentary about the filming of a reality show that went tragically, and perhaps demonically, awry. Rachel (Laurel Vail) and Kyle (Danny Barclay) are a perky young married couple who have been trying to conceive for quite some time. Rachel suffered a miscarriage at some point in the recent past, but now she’s pregnant again and everything seems to be going well this time, at least at first. Rachel and Kyle have agreed to be the subject of a reality show called “Delivery,” that documents the lives of couples who are expecting their first child. And in fact, this is something the movie gets spot-on: the parts of the film that are supposed to be edited episodes of the series that never aired look exactly like a real reality show, complete with title credits, happy theme song, and even the little rating thingie in the upper left corner of the screen.

Intercut with this sunny and sanitized footage are interview snippets with show producer Rick (Rob Cobuzio), who explains how the show had to be scrapped after Rachel’s death, and that what we are going to be seeing is footage the crew took over the course of Rachel’s pregnancy that hadn’t yet seen the light of day. This juxtaposition between the almost impossibly treacly reality-show bits and the steadily darkening tone of the other footage is really well-done, and gives the viewer a really intense feeling of being on edge, wondering what exactly is going to go wrong, and when. The fact that you know from the beginning that Rachel is going to die gives the film an unsettling patina of dread throughout.

The thing I liked best about this movie, and I say this kind of thing a lot, is how restrained it was. All of the eerie shit that begins to happen to the couple is kept very, very subtle, and the realism of it is what makes it so frightening. We really don’t see much of anything, special-effects-wise; the haunting, if that’s what it is, consists of things like knocks on the front door when nobody is there, Kyle’s dog suddenly acting aggressively toward Rachel, doors slamming shut by themselves, and weird noises and interference turning up on the camera whenever the crew is filming Rachel. There is also palpable tension growing between the couple, as lapsed Catholic Rachel starts becoming convinced that a demon named Alastor is in the house and wants her baby, and the increasingly frustrated Kyle refuses to believe her, thinking she is losing her mind and that the film crew are encouraging her fancies by letting her listen to the audio anomalies they’re capturing. The escalating arguments they have about the supposed phenomena and Kyle’s cynicism and lack of emotional support are well-acted and uncomfortably realistic. 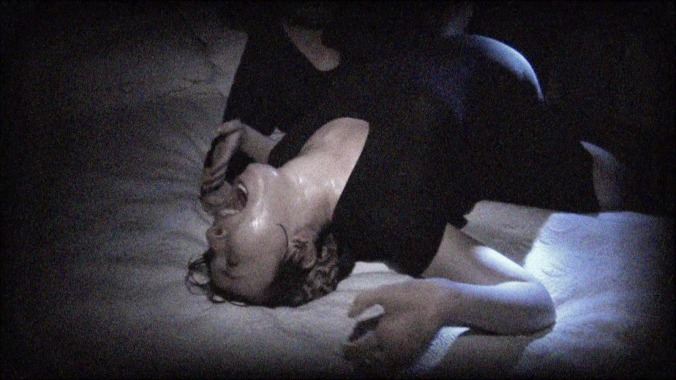 From here on out, this might get very spoilery, so don’t read further if you’re planning on watching. As the pregnancy and the movie progress, Rachel seems to get crazier and crazier: walking and talking in her sleep, eating raw meat, wandering around the house at all hours. Her artwork is getting increasingly disturbing, and at one point later in the film, she stabs and kills Kyle’s dog, saying that it attacked her, though this alleged attack is not captured on the film crew’s footage, so there is no way of knowing if this is true. In fact, I loved this ambiguity in the movie, because even after it’s over, we have no idea whether something paranormal was actually going on, or whether Rachel was simply going insane and doing all the stuff herself. It hinted toward the former, but everything that happened could also have been explained in the context of the latter, and there were some hints in that direction as well (for example, in one of the “documentary” interstitials, Rachel’s former psychiatrist says that Rachel had once been on medication for manic depression). And the end, while not exactly a surprise, was still an effective and affecting shock.

All in all, a pretty great little film, and one that shows that you can still do something terrific with seemingly overdone themes. Recommended. 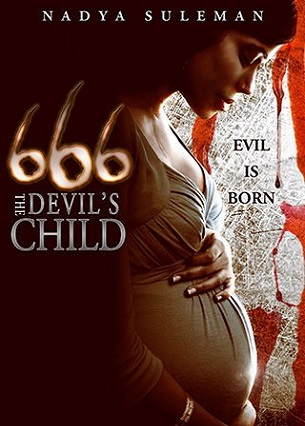 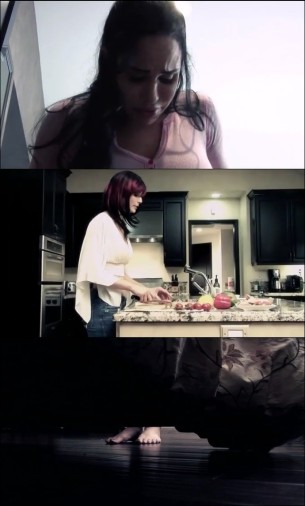 The second film on Hulu’s demonic agenda actually utilized similar tropes to Delivery, but was much, much less successful in its execution. 666: The Devil’s Child (2014) was also done in found-footage style, but despite its title, had pretty much zero to do with the devil, and was probably just given that name and cover art to lure in people looking for something along the lines of Rosemary’s Baby or The Omen. (Note: it was also released under the even more baffling alternate title, Millennium.) Don’t be fooled, though: there is no devil and no child, and just so you know, this movie was lame as hell and a total waste of time, so y’know, caveat emptor.

Directed by Manzie Jones, 666 stars famed “Octomom” Nadya Suleman as Vanessa, a plain jane film student who is doing a school project on some vague paranormal something or other. Supposedly helping her in this endeavor is her douchebro womanizer of a friend, Brad (Jeff Kongs). Brad had already made plans with a fresh new ho on the same weekend he was supposed to be helping Vanessa with her project, but when he contacts said ho Jessica (Chanon Finley) in order to cancel their tryst, she says it’s all good, because her house is built over the site of an infamous Native American massacre and is haunted as shit, so why don’t they both come and do the film project out there? So that’s what they do; Brad expects to spend the entire weekend banging the sultry and obvious-wig-wearing Jessica (who he had only just met over the internet), while third-wheel Vanessa will ostensibly film some paranormal shit for her project. Everybody wins, except for the viewers.

Once Brad and Vanessa get to Jessica’s isolated showplace of a house, the movie starts to get even more boring than it was before. Vanessa films around the house, she films the three of them endlessly playing stupid drinking games, she films Brad and Jessica making out while her voice can be heard on the camera tsking and sighing at their shameless PDA. Nothing much happens to suggest that the house is haunted, except for there’s a weird portrait of Jessica’s great-great grandmother in which the woman appears to be kissing a baby really intensely on the mouth. Also, a camera left on the pool table records a martini glass moving across the bar by itself. Oh, and there’s a little gold statue of a woman on the mantel that suddenly develops a pregger belly with unexplained blood on it. Vanessa herself has started to notice some weird sores on her stomach that kinda look like bug bites. Amid all of this, the three leads drink a lot and film themselves doing dumb shit, and roughly every five minutes, Jessica and Brad go into the bedroom to fuck, very loudly.

Finally, after eighty hours or so of this, Vanessa starts rewatching footage she’s been taking of herself sleeping to find out where the sores on her abdomen are coming from. And there on the video, she very clearly sees a cheesy-looking ghost hag floating above her bed. She seems much less disturbed by this than you’d think, apparently not even thinking of getting the fuck out of the house until much later in the movie. Her relative lack of alarm at seeing what is very obviously a demonic apparition is quite puzzling to say the least, but it could just be that the Octomom isn’t that great of an actress.

Anyway, Brad and Jessica fuck some more, Brad starts to look ill and exhausted, and finally Vanessa figures out that Jessica is a succubus and is draining his life energy or stealing his sperm or something; it’s never really explained sufficiently. Vanessa tries to get him to leave, but he doesn’t want to, and then she can’t even find the car keys, and apparently nobody has a phone to call for help, and the whole situation just seemed like it could have been resolved pretty easily if Brad and Vanessa weren’t such idiots. If I was Vanessa, I would have just left Brad’s useless ass there and split, but I guess the movie is trying to imply that maybe Vanessa is secretly in love with him, because she sure as hell seems to care a lot more about him than he really deserves, even bodily dragging him out of the house and into the car at one point.

So, spoiler alert, Jessica is finally done draining all of Brad’s virile man-juices, and she kills him by tearing out his intestines or something, and then she tells Vanessa that her role in all this is just beginning, and then in the next scene, we see Vanessa crying at Brad’s grave and apologizing to him for not trying harder to get him out of the house. And then she turns to the side, and we see that, surprise, she’s super pregnant. So what exactly happened here? Jessica succubused all over Brad and then transferred his sperm into Vanessa, for some reason? Is the baby a demon? What was Jessica’s endgame? Why did Jessica tell Vanessa that she would see her again, but not in this lifetime? Is Vanessa’s child going to be the next succubus, because there can be only one, like a Highlander? And since Vanessa did figure out what Jessica was and probably twigged to the fact that Jessica had somehow inserted a devil-baby in her womb, why on earth didn’t she get an abortion? And do I even care? No. No, I do not.

So yeah, in case you’re wondering, I really wouldn’t recommend this one, unless you’re a masochist. It wasn’t even “so bad it’s good,” it was just dull and repetitive and kind of stupid and pointless, and as I mentioned before, the fact that its title and cover art were completely misleading really pissed me off. Weaksauce.

One thought on “Hulu Horror Double Feature: Delivery: The Beast Within and 666: The Devil’s Child”