As you all know, I really do like to write my long-form movie appreciations on this here blog, but also as you know, I sometimes get so busy with all my other projects that my long posts kinda fall by the wayside. For the past few weeks, I’ve been working my ass off recording all my works in audio book form (there are two for sale so far, here and here), and also slaving away at the 13 O’Clock Podcast. But I’ve got a couple hours to kill at the moment, and I saw a pretty damn good movie the other day, so let’s do this.

How I ended up watching it was something like kismet. The God of Hellfire woke up on Sunday morning, and immediately (and inexplicably) started describing scenes from a movie he’d seen a long time ago, asking if I knew what movie it was. It didn’t sound familiar, but then he suddenly remembered that Sting had been in it, which narrowed the possibilities down quite a bit. After a few minutes of sleuthing, we discovered that the film was Brimstone and Treacle, from 1982. It seemed strange to me that I had never seen it, because it was written by influential British playwright Dennis Potter, whose The Singing Detective and Pennies From Heaven I had quite enjoyed. I read the synopsis of Brimstone and Treacle and thought it sounded intriguing, and the GoH told me it was right up my alley, so we immediately tracked the movie down so I could remedy this grave oversight in my British movie watching expertise. 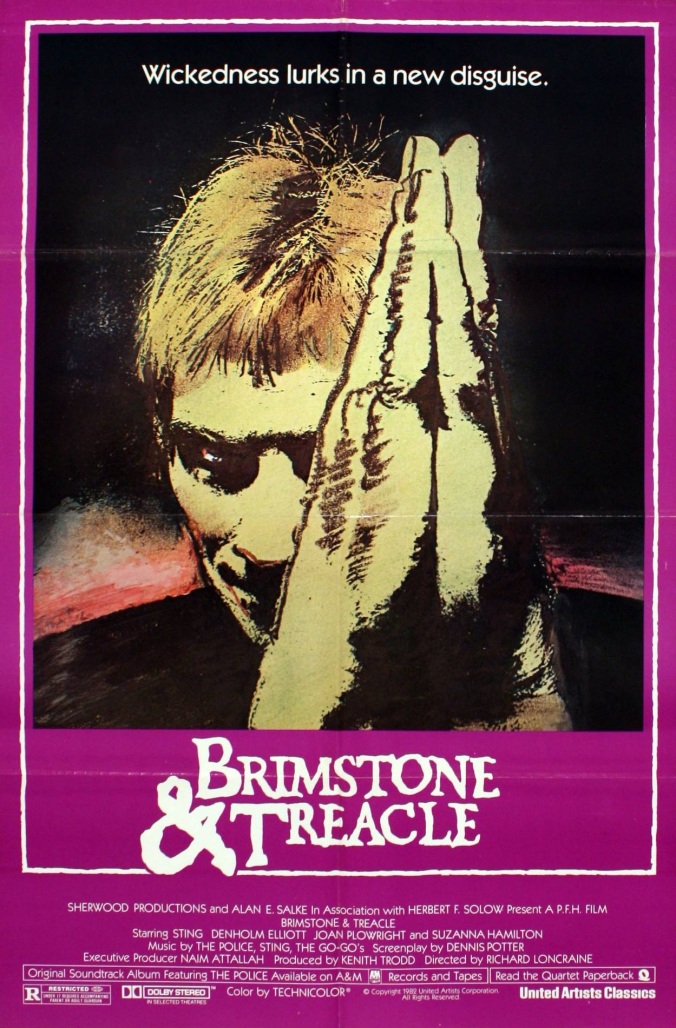 Brimstone and Treacle was originally written and produced in 1976 for the UK’s much-beloved Play For Today series, but upon seeing the finished product, the BBC balked at its disturbing content and refused to air it. Potter rewrote it for the stage, and it was produced there in 1977. The original Play For Today version was finally shown on British television in 1987, but the version I want to talk about was the delightfully dark and bizarre 1982 version. There are spoilers ahead for both the film and the TV versions, so reader beware.

Sting, doing a pretty entertaining take on Malcolm McDowell’s Alex from A Clockwork Orange, plays a mysterious young con man named Martin Taylor. His game entails running into random dudes on the street, pretending to know them, and then trying to wangle his way into their lives for purposes unknown. He fails at his first attempt, but then sets his sights on the harrumphing, uptight Tom Bates. Tom is leery of this rather pushy young fella, who claims to be a friend of his daughter Patricia, and he grows even more suspicious when Martin doesn’t even know that Patricia was in a terrible car accident a few years previously which left her brain damaged and completely dependent upon her parents. Sensing his skepticism, Martin fakes an illness, and it would seem that Tom has been hooked, because he agrees to bring his car around and take Martin back to his house to recover. But the wary Tom instead ditches the young man and heads home without him. The sly Martin, however, has lifted Tom’s wallet during his “fainting spell,” so now he not only knows where Tom lives, but has an excuse to pay the Bates family a visit.

Martin arrives at the Bates home later that evening, and immediately turns on his considerable charm. He claims that Tom must have dropped his wallet in all the confusion, and Martin, being a good samaritan, immediately came to return it. Martin begins buttering up Tom’s wife Norma (who was named Amy in the original TV version), praising her saintliness and patience in taking care of Patricia, and sympathizing with her about how hard her life has become after her daughter’s accident. Tom is not having any of it and tries to get rid of the guy, being outright rude to him and shouting at his poor wife like an asshole, but Norma sees only a genuinely delightful young man who is advocating for her and siding with her against her condescending husband. Norma is even further entranced by Martin’s professed piety (Norma is a simple woman and very religious, while Tom is a bitter, hateful atheist who nonetheless makes his living publishing religious texts for the bereaved. It should also be noted that in the TV version, he was a member of the National Front and a raging xenophobe, though this was not explicitly mentioned in this film version). 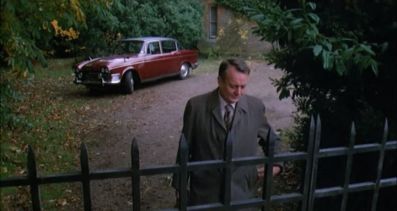 When Martin claims that not only had he been friends with Patricia, but that he had also asked her to marry him while they were at college together, Norma sees no problem at all with allowing Martin to stay in the house for a little while to care for Patricia so that Norma can have a much-needed break. Tom seems like he’s going to bust a vein as all this is going on, and a few blazing arguments ensue, but eventually, Martin’s excellent cooking and apparent conscientiousness make Tom soften his hatred somewhat. Martin does appear to be taking good care of Patricia, cleans the house for the family while they are out, and seems to behave impeccably. Norma is blissfully happy, as she can now leave the house to go get her hair done and do some window shopping, which she hasn’t been able to do at all in the years since Patricia’s accident.

But as it turns out, Tom was right to be suspicious of the too-good-to-be-true Martin, though it’s never made explicitly clear what Martin’s true endgame is, or what exactly he intended to do once he had won his way into the Bates family’s confidences. For no sooner has Norma toddled off to the salon than Martin begins sexually assaulting the bedridden Patricia, who is so brain damaged that she cannot speak to tell anyone about his attacks. This is creepy enough, but the strangest thing about Brimstone and Treacle is that even though molesting a disabled girl is obviously a horrible thing for Martin to be doing, the outcome of the entire episode turns out to be almost entirely positive, in a really bizarre and sort of disturbing way (hence why the film’s subject matter so bothered the BBC). 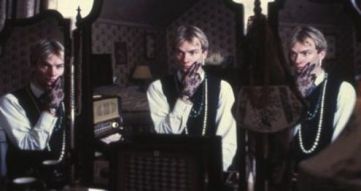 Now, in the TV version, it’s pretty clearly implied that Martin is a demon; his character is even portrayed with hairy feet. In the film version, this is merely hinted at; Martin looks completely normal, but there are some offhand remarks he makes (“I could be the Devil himself!”) that hint toward a possible demonic (or dark angelic) nature. At one point in the film, while Martin and Norma are praying by Patricia’s bedside, lights start flashing and the curtains start blowing around in what seems to be a supernatural storm of some kind, but it’s implied that this may be only from Martin’s point of view, as Norma does not seem to notice it. Tom also dreams of the young man acting as an agent of chaos, which he does end up being in the end, though whether this is a good or bad thing is left to the viewer to decide.

During the course of the film, it comes to light that Tom was fucking around on his wife with one of Patricia’s young friends (and it’s further implied that he is one of those skeevy über-conservative dudes who is all into underage girls, and perhaps even had sexual feelings for his own daughter). Patricia caught him in flagrante delicto two years before, and ran out into the street, whereby she was hit by a truck and put into her pitiable state. So it’s partially Tom’s guilt that makes him almost reluctant to even entertain the idea that Patricia will ever get any better, even while Norma is constantly praying for her recovery and insisting that the girl’s condition is improving. But Tom doesn’t WANT his daughter to get better, because he will be exposed, so he constantly denigrates Norma’s hopefulness and generally acts like a raging piece of shit.

But Martin’s awful actions toward the disabled Patricia have a (perhaps unintended) side effect. During his final and most blatant rape of her, she begins to scream, waking her parents, who run downstairs and find her naked. Martin has broken a window and escaped, but then the Bates discover that Patricia has completely recovered from her brain damage, and the first thing she does is point a finger at Daddy for fucking around on Mom and causing the accident that left her a vegetable for two long years (and could it be that dear old Daddy was also molesting her as well? This is left ambiguous, as all Patricia says to her father is, “How could you?”).

So here is the conundrum, as I mentioned, and what makes this movie so deliciously distressing. Martin was clearly up to no good from the beginning, sliming his way into the family and taking advantage of their hospitality, not to mention their poor daughter. But in the end, he also did them a great deal of good. He worked diligently for them for no pay, and he lifted a tremendous burden off Norma, allowing her to regain some semblance of a life for herself, as well as the confidence to stand up to her horrid husband. He also exposed Tom’s hidden, evil nature, as well as answered Norma’s prayers by apparently healing her daughter.

But was this his intention all along? Was he actually a demon, or perhaps a dark angel, doing God’s bidding, but in the ickiest way imaginable? Or was he just a dreadful person who inadvertently did the family some good? Would Patricia have gotten better anyway, even without Martin’s “ministrations”? It’s all left to the viewer’s imagination whether the chaos Martin caused was deliberate and meant to help them. At the very end of the movie, Martin is seen again walking the streets later that night, trying to pull his patented scam on yet another seemingly random man. But this man seems to know him, and as they walk off down the road, the man says that the bishop is waiting to see him, “with his one good eye.” Now what on earth could that possibly mean? (One-eyed bishop? That’s a dick joke, right?)

The GoH pointed out to me that perhaps Martin wasn’t “raping” Patricia as such, but was doing a sort of Biblical, Elisha-lays-on-dead-boy-and-brings-him-back-to-life deal. This sounds plausible, and perhaps it was what Potter had in mind, though I haven’t found any other reviews that make this connection, so who knows. GoH also remembered that Odin was often portrayed as one-eyed, so that might be another reference there (with Martin being a sort of trickster god figure), but again, it might be something else entirely.

That’s what makes this movie so great, though; it’s pretty uncomfortable to watch, what with all the disabled-girl-raping and the possible good that comes out of it, which leaves the viewer in a strange moral quandary, but it’s ultimately left up to us to decide how we feel about all of it. If you like Dennis Potter’s stuff, which tends toward the weird and misanthropic anyway, then I can’t see why you wouldn’t enjoy this one too; the performances are fantastic all around, and the whole atmosphere of it is just so pleasingly off-putting that I found myself quite enchanted by it, despite its grim and somewhat unsettling subject matter. There’s also a fairly twisted vein of particularly British black humor folded into the mix; another point in its favor. It also must be said that the soundtrack (consisting of mostly Police tunes, with some Go-Go’s and other stuff thrown in there) is also pretty rad.

Thanks for reading, as always, and until next time, keep it creepy, my friends. Goddess out.