On this episode of 13 O’Clock, we’re talking about what is probably one of the weirdest and ostensibly most haunted houses in the United States, if not the world: the infamous Winchester Mystery House. This sprawling, mazelike, 24,000-square-foot mansion was built by the widowed Sarah Winchester and contains many fascinatingly bizarre architectural oddities, including doors and staircases leading nowhere, skylights in the floor, and balconies that face indoors. Did Sarah really build this strange house in order to appease restless spirits? Or was she just an eccentric who liked experimenting with different architectural styles? Tom and Jenny discuss the gorgeous and allegedly haunted house, along with a news story about another possibly haunted house that was also, incidentally, featured on the first season of American Horror Story. Relax in your seance room and channel our voices as we bring you a ghostly episode 79.

Clip at the beginning from the trailer for the 2018 movie Winchester: The House That Ghosts Built. Song at the end: “A Song About the Winchester Mansion” by The Paranormal Song Warrior. 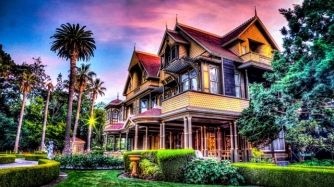 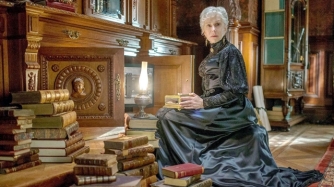