To a public entranced by the seeming magic of photography, capturing ghosts on film was par for the course. The original article I wrote is here. 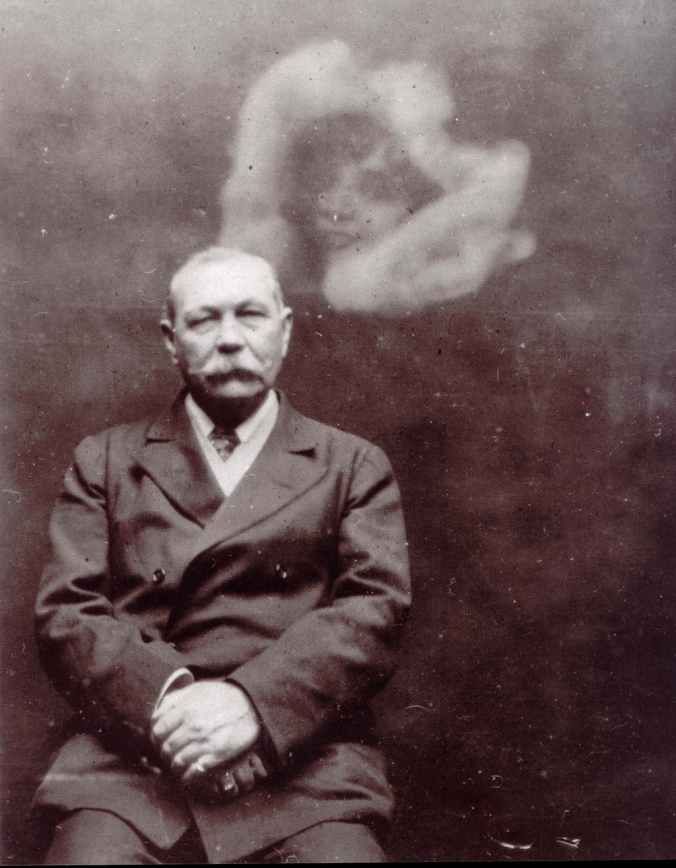 It seems hard to imagine in this modern era of ubiquitous digital photography and cheap photo manipulation software, when creating a picture of a ghost (or anything else) is as simple as clicking a mouse; but to the Victorians, the realism of the photographic image seemed incredible and, somewhat ironically, rather mystical. The art of photography was to them a way to miraculously stop time, to forever embed memory in concrete form. Given this perception, it was probably inevitable that people of the era would initiate not only a demand for photographs of corpses, but also a brisk trade in supposed pictures of the spirits of the dead.

Photography as a medium grew out of scientific experimentation in optics and chemistry. The earliest photographic images were made by placing objects (such as plants or fossils) onto light sensitive paper and then exposing the paper to the sun. William Henry Fox Talbot produced the first examples of these, and later Louis J.M. Daguerre experimented with similar images before going on to develop the “daguerreotype,” the forerunner of the modern photograph.

Because of the nature of early photography — passive camera operators, long exposure times — it was widely felt that a photographic image was a completely objective record, untainted by human bias. Additionally, Eadweard Muybridge’s famous photographic series of a galloping horse demonstrated that the flat, uninvolved gaze of the camera could capture things the human eye could not see; in the case of the horse, this proved to be the fact that all four of the horse’s hooves were off the ground simultaneously at some point during the gallop. These two aspects of the new technology — both its supposed scientific inviolability and its ability to freeze images invisible to the human eye — contributed to its use in the sciences as well as among adherents of the new religion of Spiritualism.

The rise of Spiritualism in the 19th century coincided with the waning of traditional religious belief and the flowering of the Enlightenment, when people began to realize that science could be used as a tool to solve problems that had vexed humanity for millennia. Spiritualists, even while they attempted to speak to the dead at seances and shrouded themselves in paranormal trappings, saw themselves in a decidedly scientific light. They reasoned that since science had uncovered and explained invisible “forces” animating the universe — electricity, magnetism — science would also soon explain “life forces” that survived the body after death. Photography played a large part in their supposed “experiments” aiming to prove the existence of ghosts.

Early photographers were of course aware of the faint ghostly images produced when the subject of the photograph moved while the plate was being exposed. It isn’t clear who was the first photographer to use this quirk as a means to make spirit photographs, but one of the most famous was William Mumler, who in 1861 began producing spirit photographs in his Boston studio. Likely using double exposures and various other tricks, Mumler made quite a comfortable living taking pictures of grieving sitters with ethereal friends and relatives hovering nearby. He even took the infamous photograph of Mary Todd Lincoln in which the supposed spirit of her assassinated husband stands behind her with his hands resting on her shoulders.

Mumler’s fame was so widespread that he soon came under scrutiny from authorities, who eventually charged him with fraud — not because his pictures were not really of ghosts, which of course they weren’t, but because the blurred images of the “spirits” in the photographs were not usually recognizable as the friend or relative of the living sitter.

Photographic Fakes and the Culture of Mourning

While the Victorians were quick to accept the reality of the spirits in the photographs, believing as they did that photography was resistant to human manipulation, the truth is that the pictures were fakes, in most cases rather clumsy fakes. Like that other Spiritualist trope, the seance, which was performed through cunning trickery and hidden accomplices, spirit photography stood as a testament to creative fraud, an attempt to bolster people’s deeply held beliefs through managing their perceptions of reality. The culture of death and mourning prevalent in the Victorian era combined with a new attachment to the objectivity of the scientific method produced a strange hybrid of materialism and metaphysics whose reverberations can still be felt to the present day.